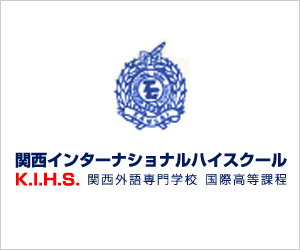 2020 has been the year of the rat, which is fitting given that the rat flea has been found to carry the plague.  This year’s speech contest was reorganised in light of Osaka’s recent increase in cases.  The two competitions were broadcasted live on Zoom to half of the students in their homeroom while the other half watched in the spacious auditorium.  This year also saw the inclusion of presentations to make them similar to the popular format of TED Talks. 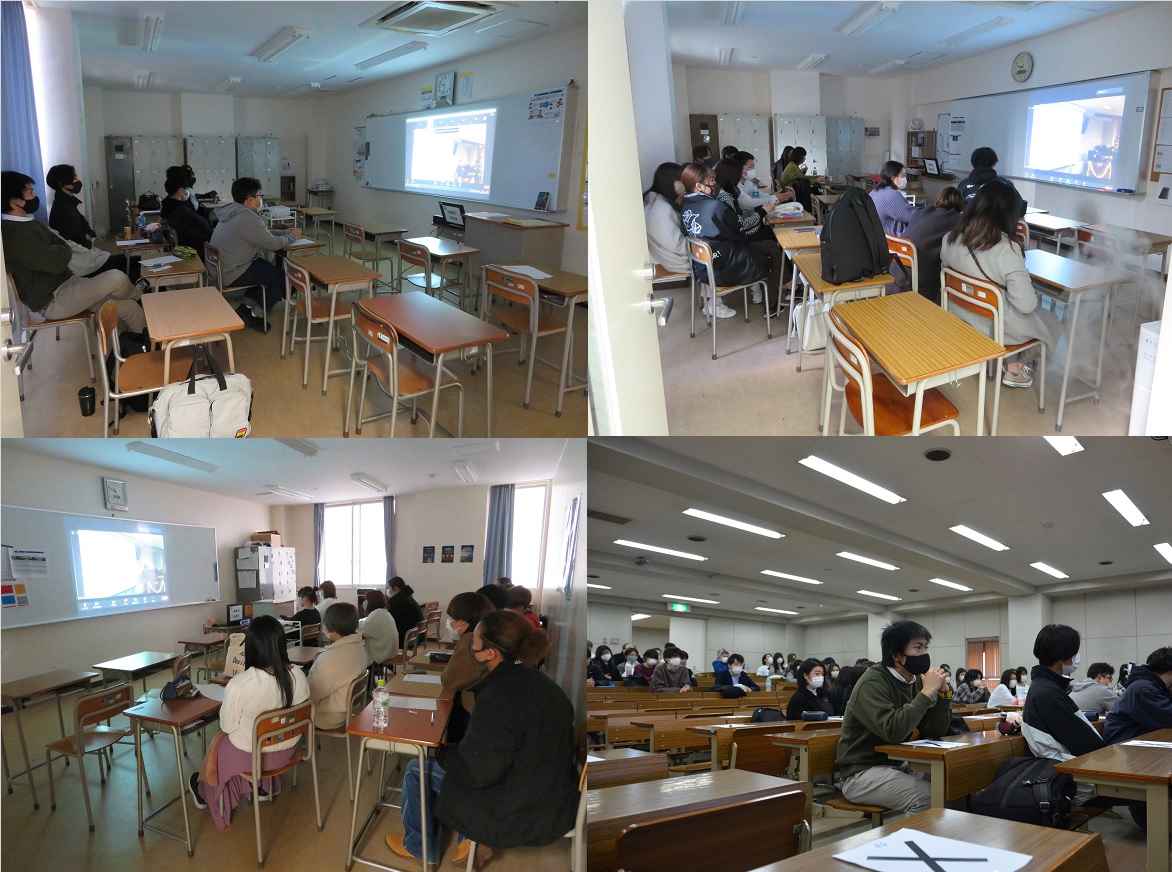 There were eight contestants ready and raring to go.

The competition started strong with an excellent speech from first year Kokona (1-3, Level 3). Her heartfelt talk about the importance of family and friends was warmly welcomed. 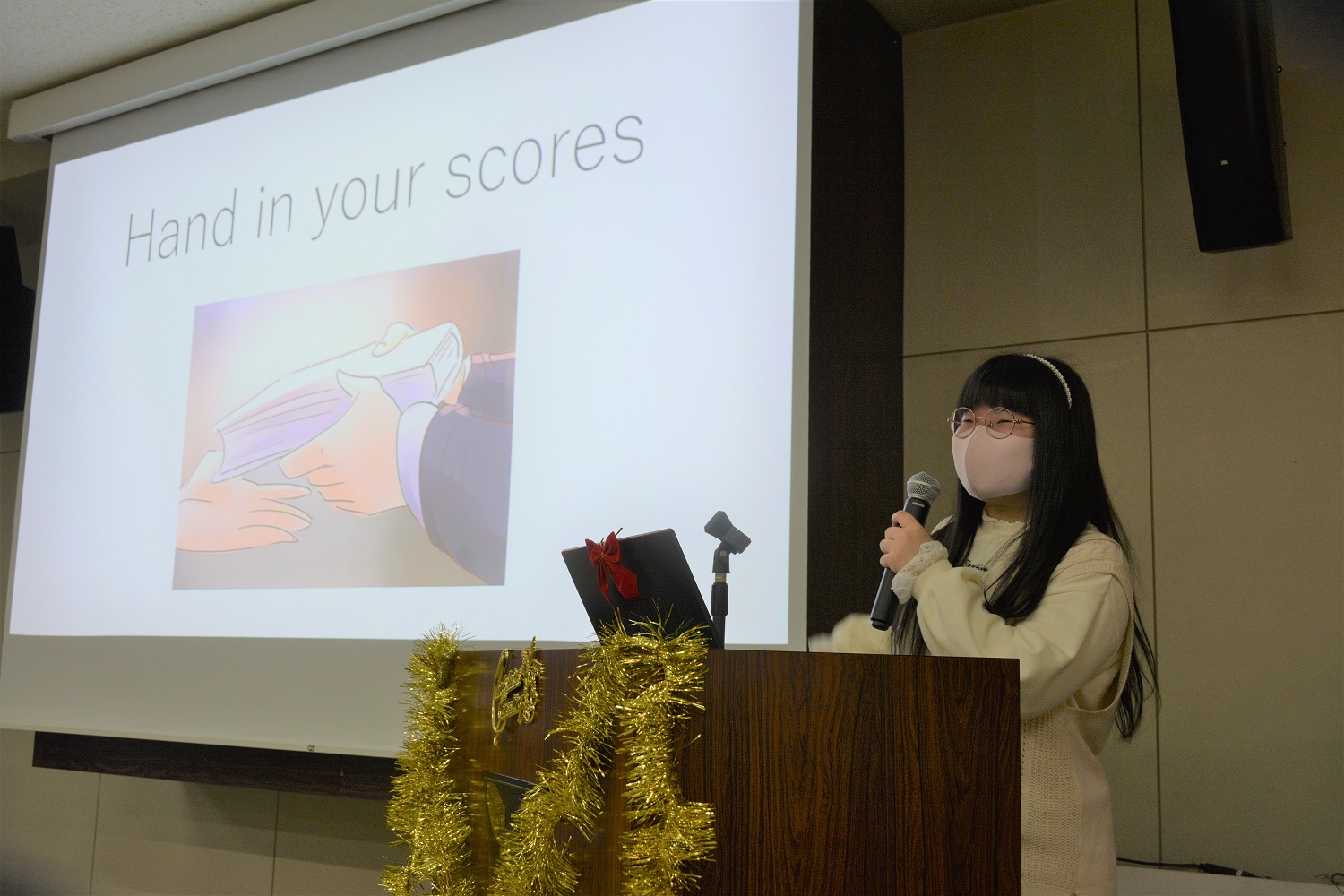 Next, Uno (1-1, L2) stepped forward and delivered a hard-hitting commentary of poverty among children. She captured the audience and received their support. 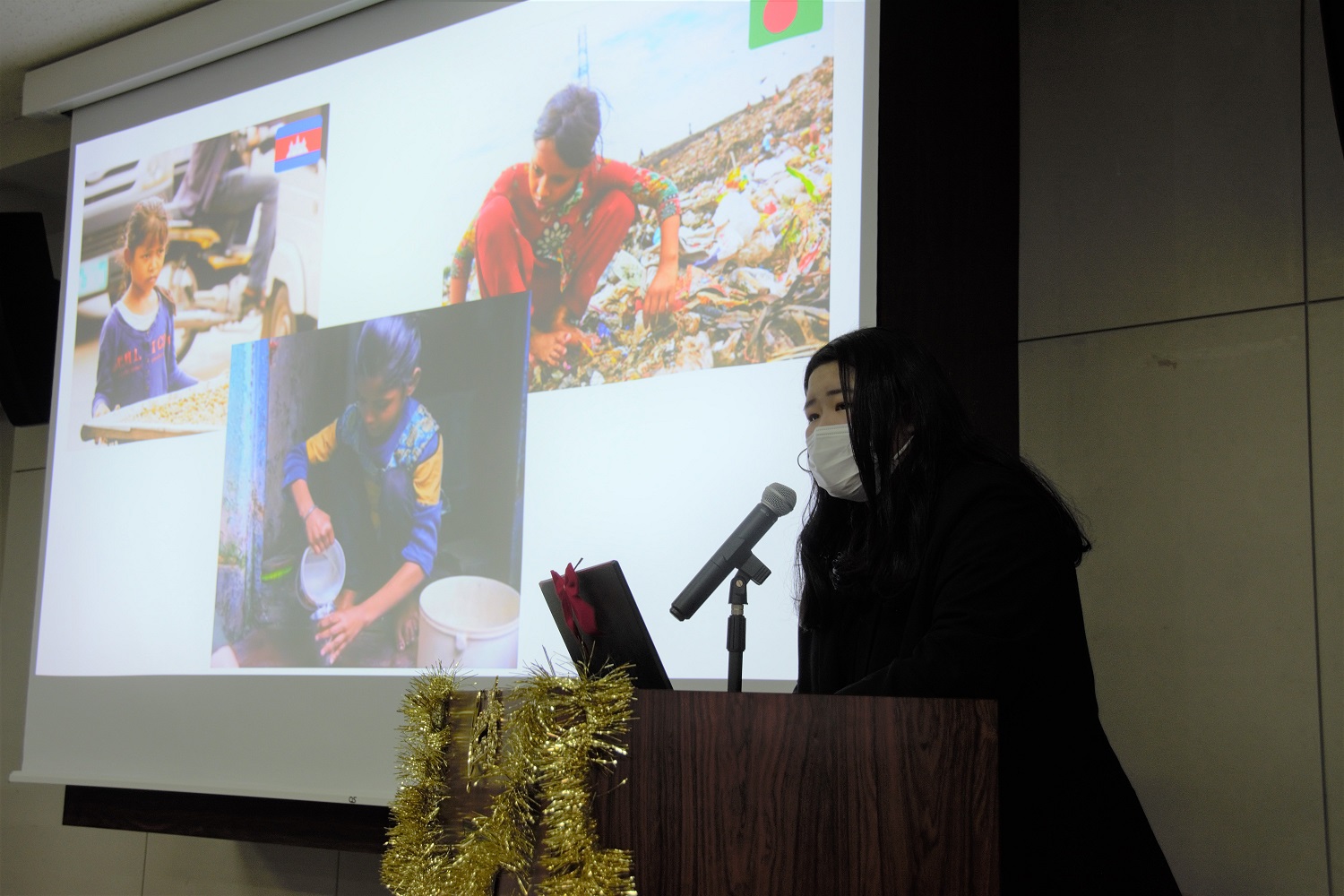 This was followed by a confident speech from Mihane (1-1, L2) about personalities.  Her interesting observations of people’s personality and its influence on their career left many thinking about themselves. 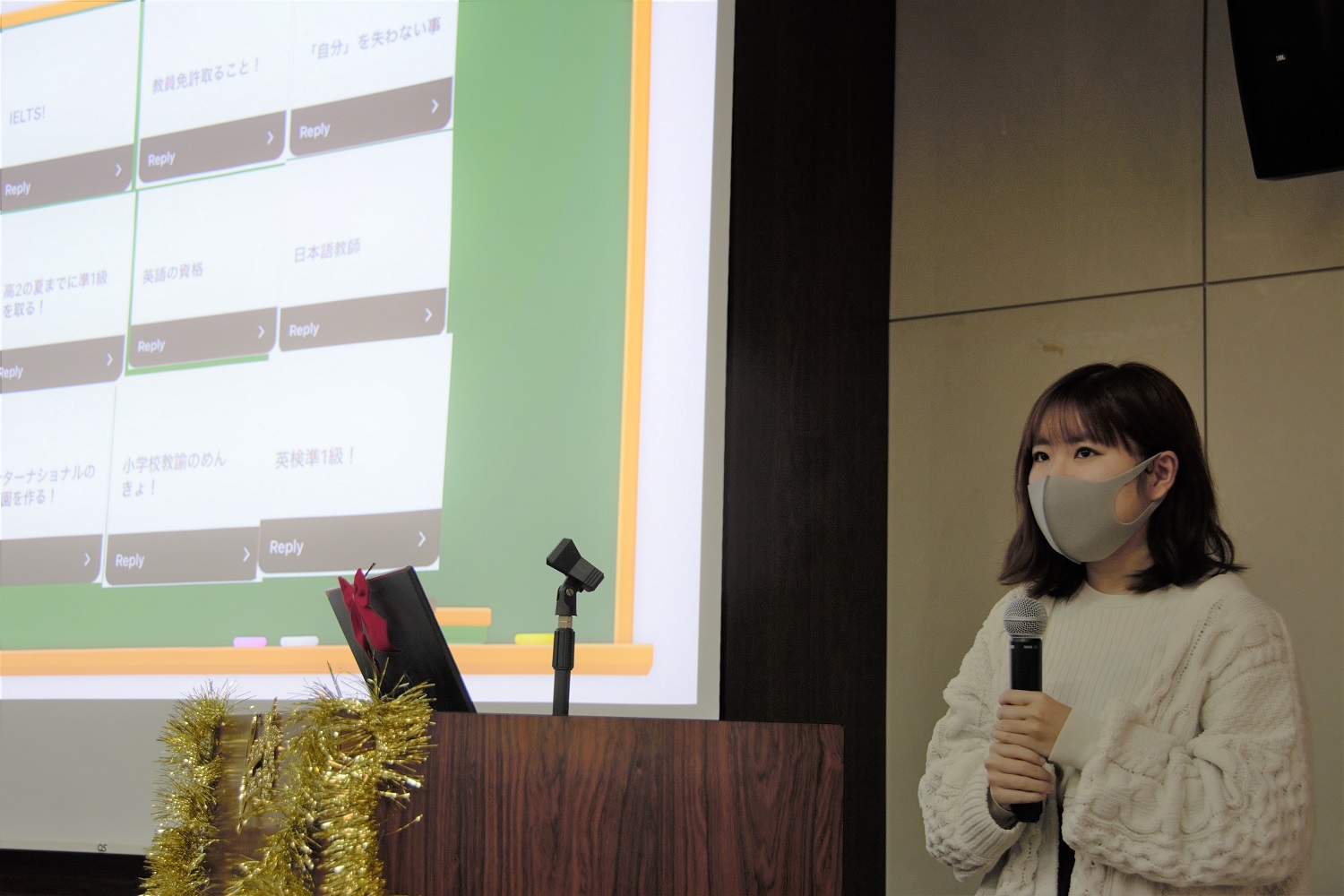 Then, Yui (1-3, L2) nervously approached the podium, but grew in confidence as she discussed the challenges faced when trying to make friends during the pandemic lockdown. 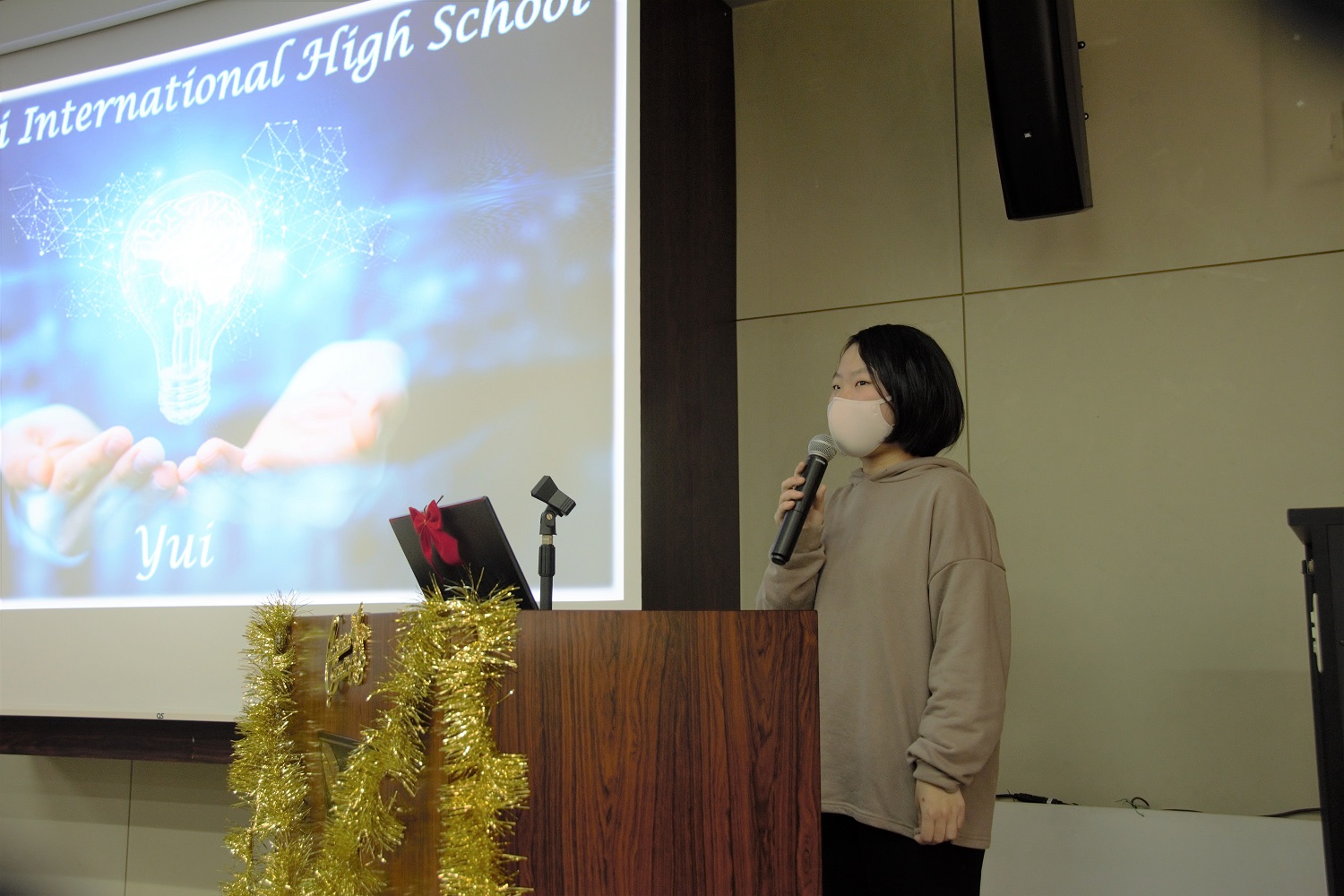 Finally, a sleepy Kotowa (2-2, L3) delivered a speech that stunned a quiet room.  Her emotional explanation of the trials and tribulations of K-Pop stars was expressed clearly and her combination of fact and opinion left everyone feeling her pain. The third placed speech was about basic income and the struggles a society goes through to help those in need of assistance.  Yuna (2-2, L3) spoke well and used her presentation to help the audience fully understand the statistics and connections she was discussing. 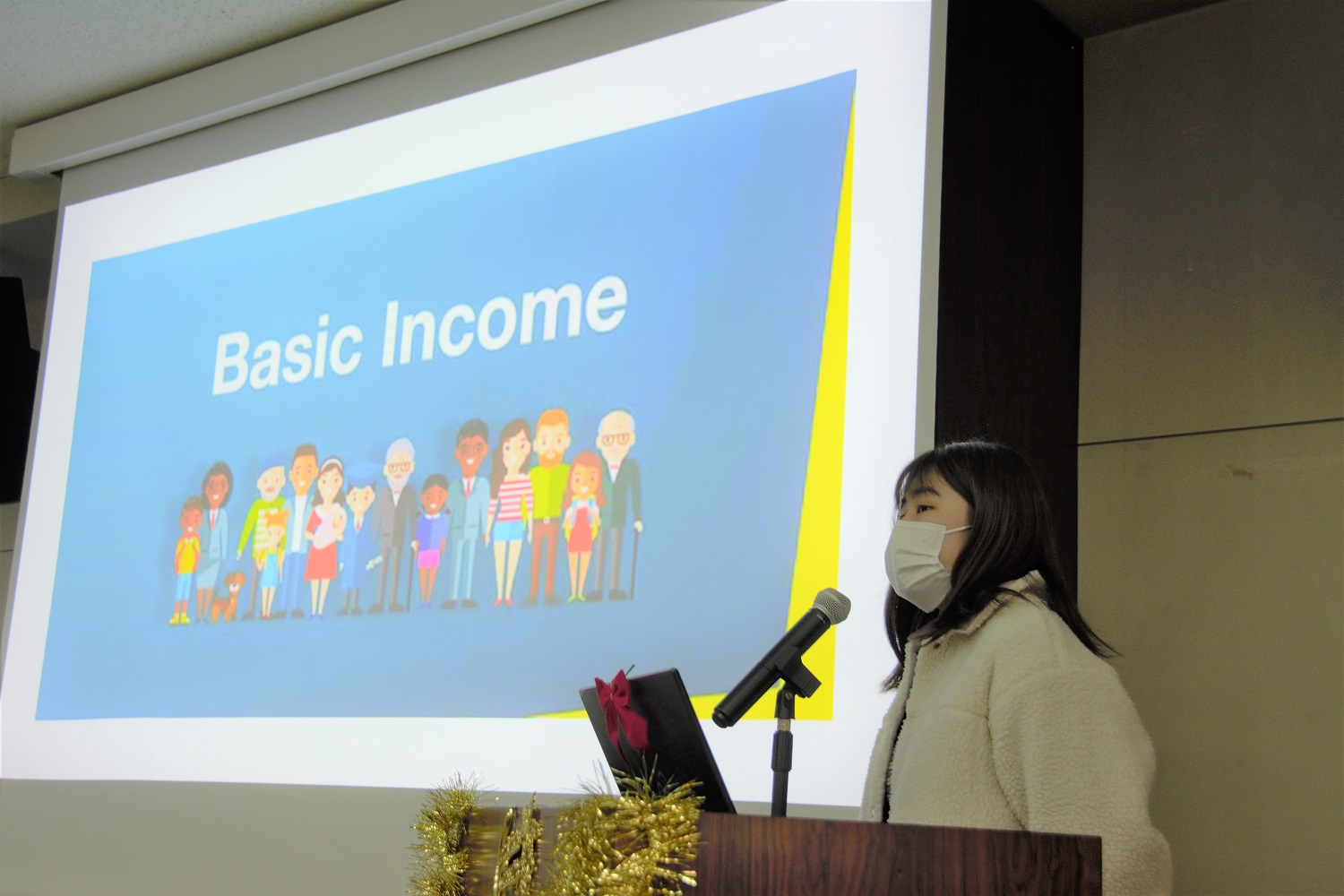 The speech that received the second prize compared the various ways we can make a payment without cash. Koichiro’s (2-1, L3) relaxed body-language and confidence using English allowed him to connect with the audience and teach them about the future of e-money. 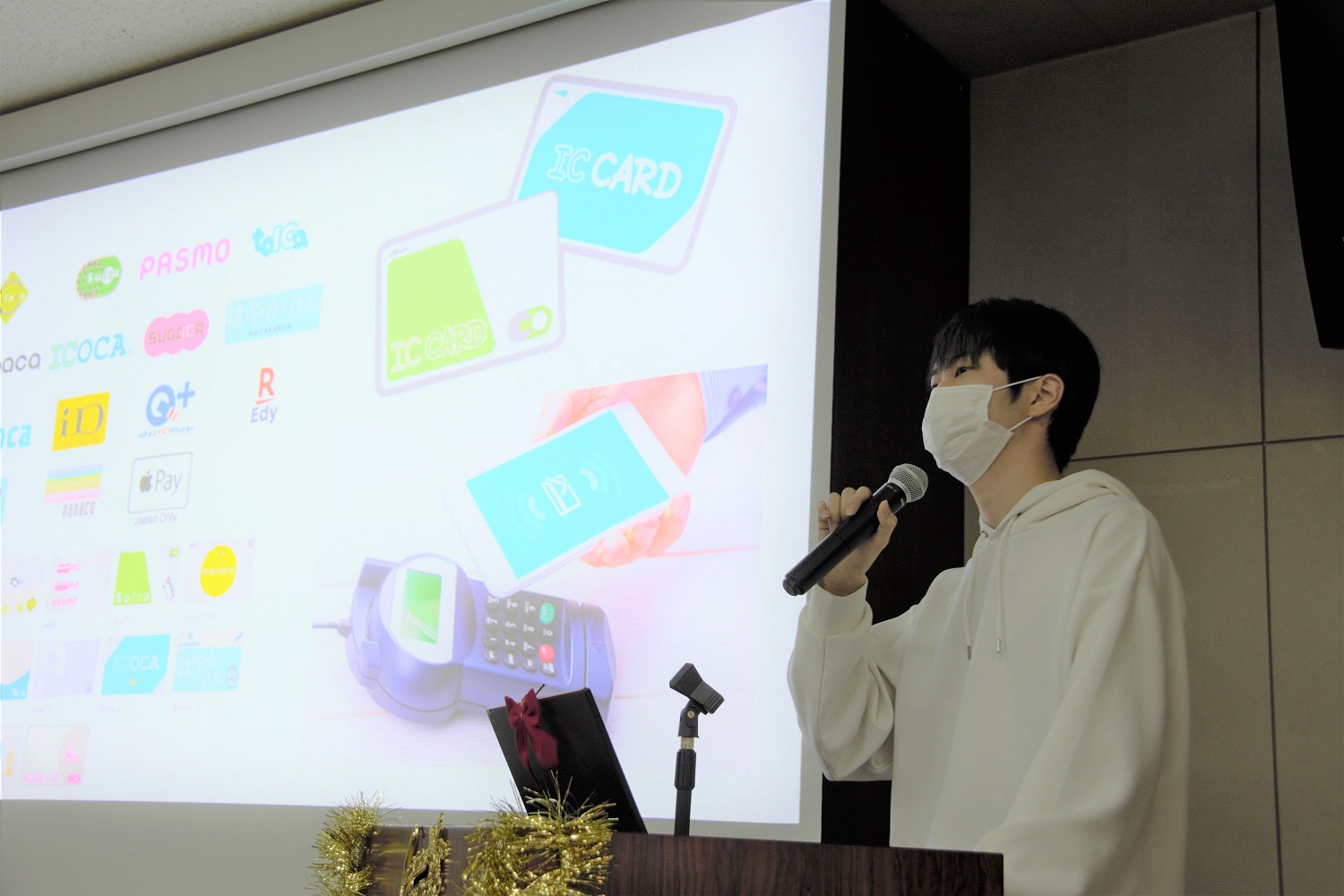 The champion speech began calmly and finished in laughter.  Mika (2-2, L3) grabbed the attention of the audience mid-way through with her hilarious impression of a rushing ambulance.  From that moment on, Mika had everyone listening and laughing along with her, but also reflecting on the importance of her message of cooperation with the emergency services.  A proud champion was made. 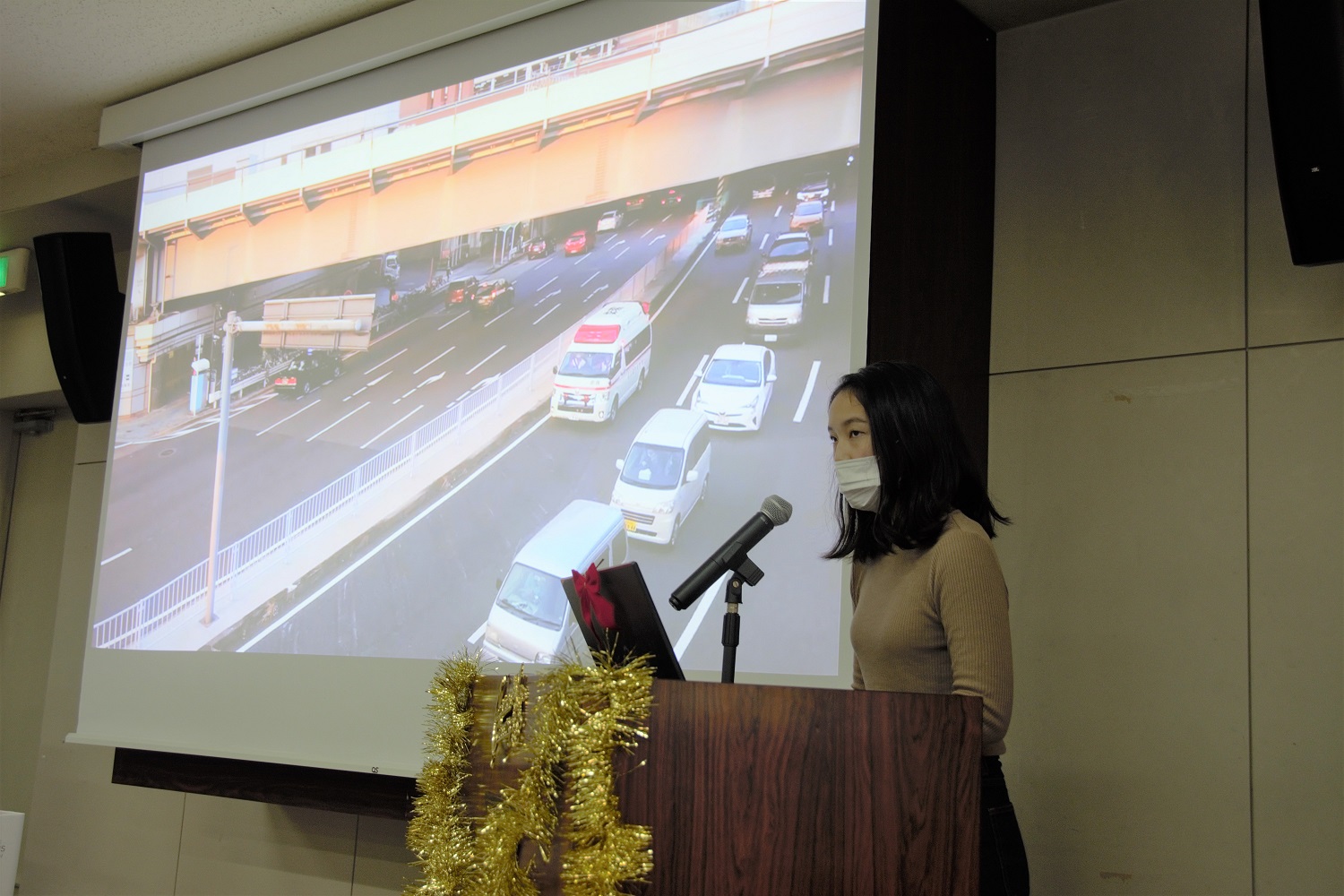 This year was the closest long speech contest in recent years.  All five contestants gave solid speeches and had clear presentations for those with a beginner’s English ability to understand.  Unfortunately, the hard-working Chihiro (2-2, L4) was unable to attend through illness, but I can assure you that she had a fantastic speech (about the fashion industries impact on the environment) that deserves mentioning.

The speeches began with the current hot-topic in Japanese politics, paternity leave for fathers.  Hozuki’s (2-1, L4) understanding of the events showed an outstanding passion for improving family connections, especially the importance of new-borns’ early contact with both parents. The second runner-up was Keiji (2-2, L4).  He confidently guided the audience through the historical events that people often misunderstand, giving support to the fact that we need to use our history to shape our future. 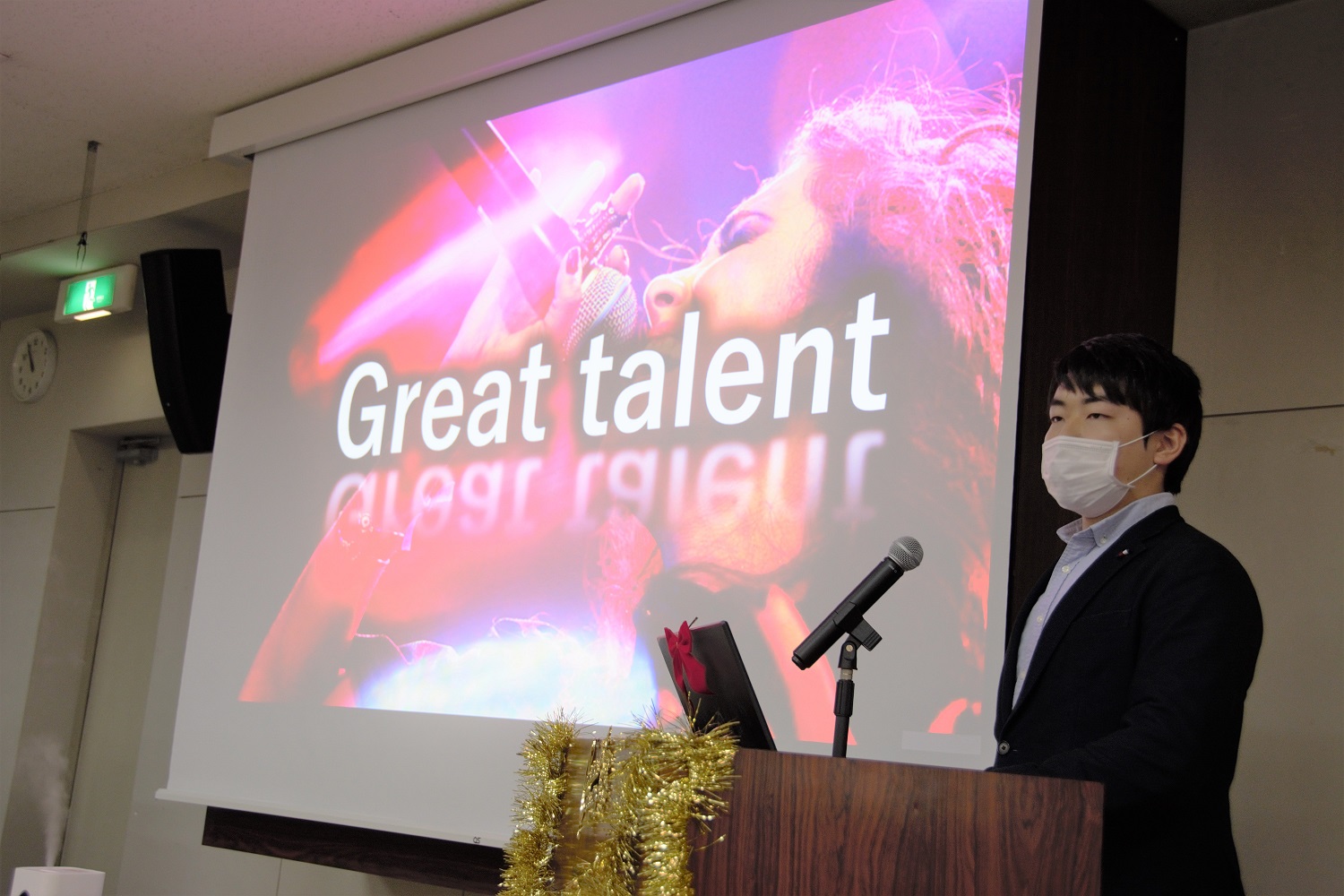 This year’s third prize went to a passionate speaker, Taichi (2-1, L5). His personalised account of the Black Lives Matter (BLM) movement enabled the audience to see how important it is for Japan, as well as the United States, to educate people about ethnicity. 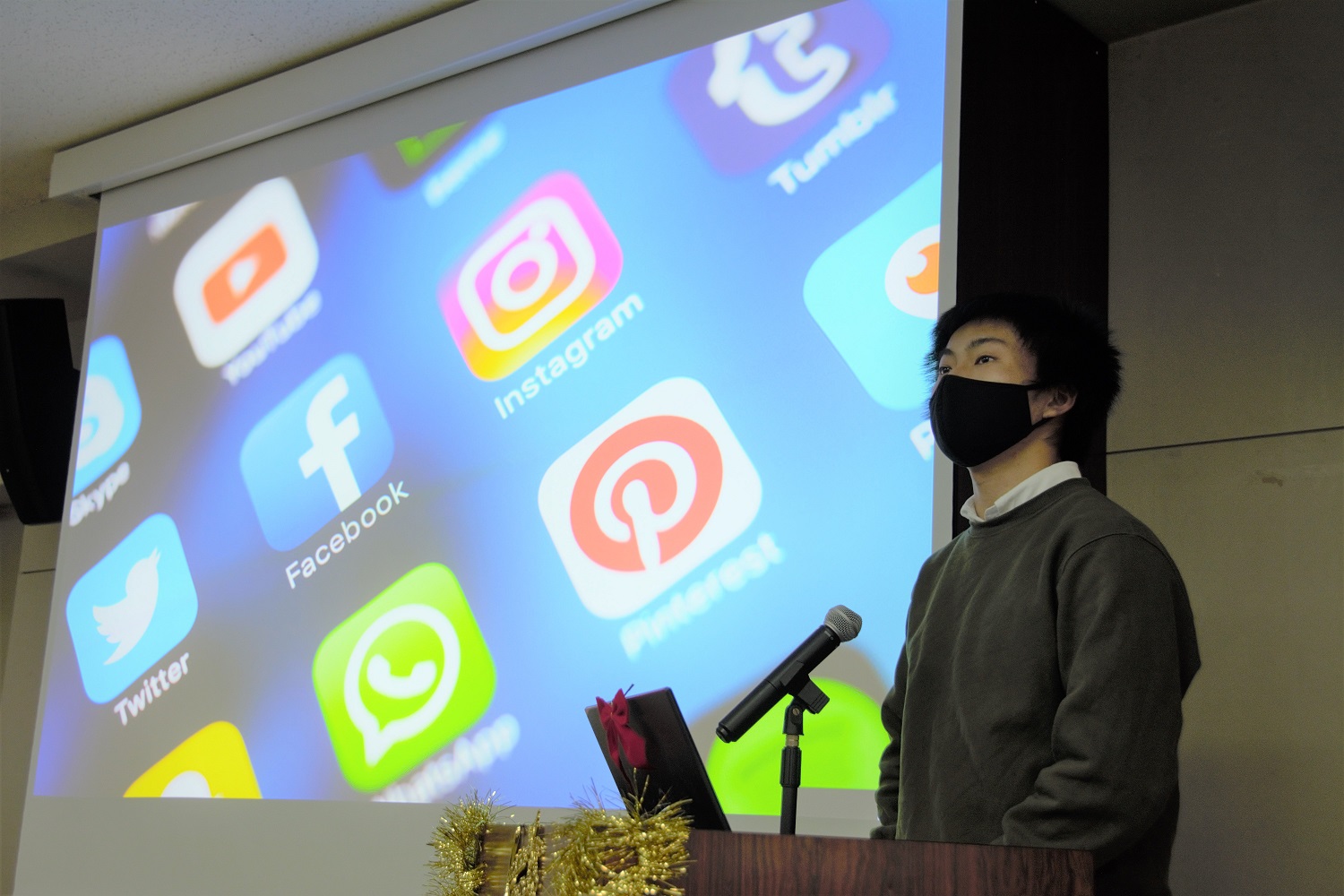 The second prize went to a speech about the opportunities we waste because we don’t participate fully when learning the basics of a subject.  Maino’s (2-2, L5) honesty struck a chord with the audience and her relatable examples helped us all understand why boring doesn’t mean unimportant. 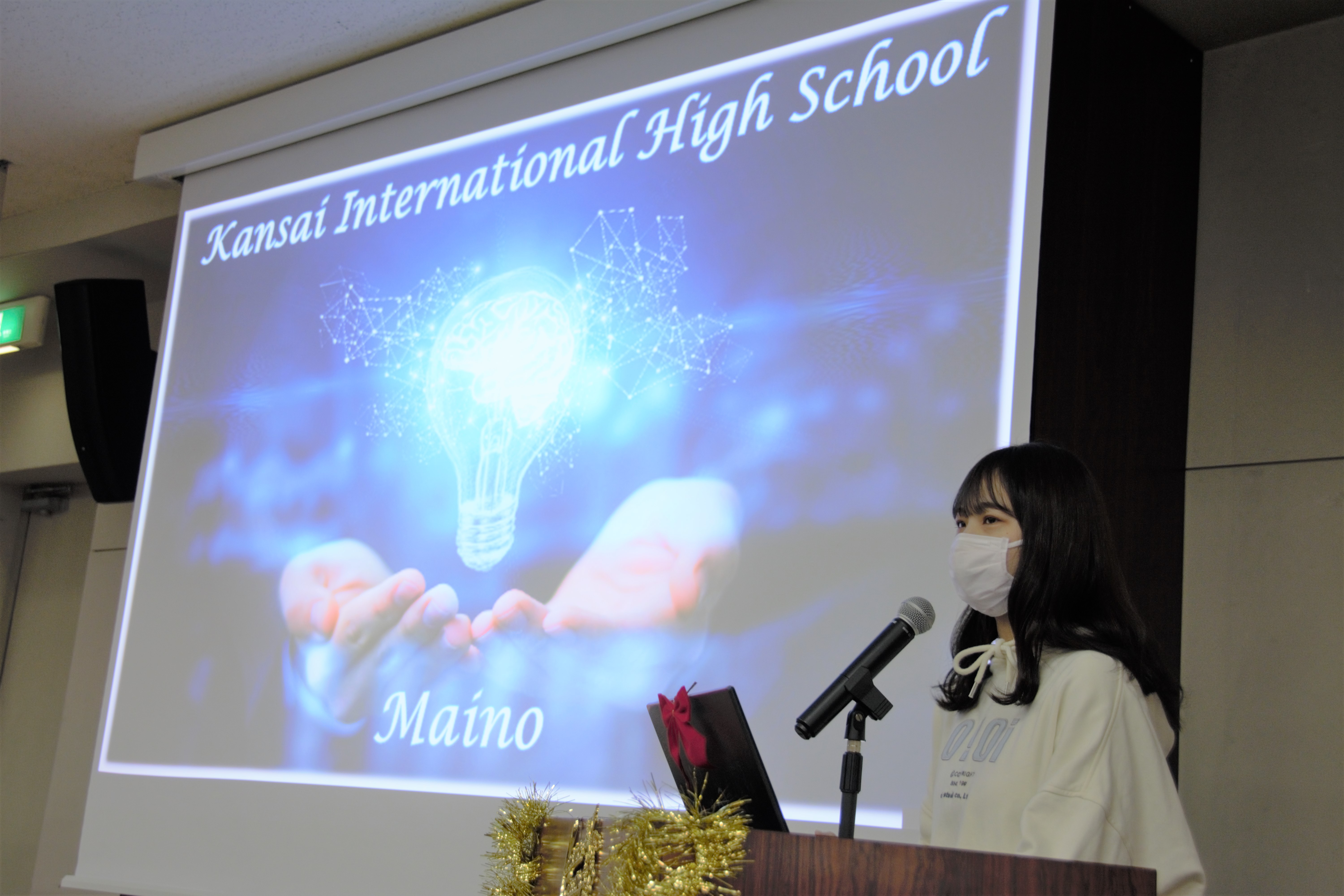 Finally, the big one: first prize.  Yujiro (3-1, L5) used his disappointment at being the only third-year in this year’s contest to talk about the regrets he has.  His speech centred around the message that we regret the chances we didn’t take more than those we did (even if we failed in our attempt).  Please enjoy reading the whole speech below. With the end of this year’s speeches, the entertainment could commence.  The first performance was a music video covering Heather’s My Kind of Present by the angelic duet Maria (1-2, L6) and Akari (3-3, L4) on the ukulele and guitar respectively. This was followed by KI’s concert pianist, Koki (3-2, L4), who played Rachmaninov (No. 2 and No. 4) and Senbonzakura before a festive hymn (Once in Royal David’s City) and Christmas favourite (We Wish You a Merry Christmas).

My Regrets at KI

When I was thinking about the topic for this talk, I sometimes felt like I should talk about success, challenge or life because they might sound inspirational or sound like I’m smart. However, I’m not smart as I look like and I have nothing fancy to advice you. So, let me just keep talking about my regrets at KI. I usually regret myself a lot and it’s been happened so many times in KI life.

Before jumping into my talk, I have a few questions here. By a show of hands, how many of you would claim that/someone has ever witnessed the extra-terrestrial? Let me ask another, who didn’t understand my question? The last question is what do you do when you don’t understand English question?

One of the things that I was mainly doing especially 2 years ago is saying “Yeah”. It means “Yes”. It is simply because I had no idea what teachers were talking about. So, what I had is just an incredibly basic word “Yes”. I used to literally respond with Yes to every question I don’t understand. Being Yes man in a conversation is absolutely one of my biggest regret. That means I kept ignoring many opportunities to work on my English every time I pretend like I understand the question. So, what you imagine now is mostly accurate, it was just terrible. For instance, the teachers asked me like “How is it going?” I was like “Yes”. Did you get high score in an exam? “Yes”. It sometimes makes sense but as the conversation goes deeper, I was getting confused and started to be petrified and ended up doing like yeah, yes, Okay. Now I’m going to give you an interesting fact that All of teachers can definitely notice that you don’t understand the question I’m sure. Now, it is clear that I needed to just ask again to make better understanding of what they were trying to say and spend much more time improving my English.

While I was wasting a plenty of time for my English, the English ability of another student were getting amazing. They actually inspired me to get into English more and I strongly believe they are talented at learning English as a second language. I honestly think KI students are so talented. There is a student who is amazing at language, dancing, singing, sports, fashion, taking a photograph, playing the instrument, oversleeping and anime drawing. However, I did suddenly feel like what am I amazing at? Feeling inferior is another regret. At that time, I just considered them very special, but I’m not special. A few years later, I’ve finally worked out the most satisfying conclusion to solve this regret. Today, I was expecting to see other third grade student’s name on the speaker’s list but I couldn’t find anybody’s name. Let’s put it this way, I am the only person who is giving speech as a third-grade student and this contest is about to be finished up by my speech. I feel like I am special today.

To regret is just like finding another way. You’ve done something and after that, you will be immensely curious to see what was supposed to be happened in different way and be like what if I didn’t do that? We are going in this circle. From my experience, I think there’s no “best way”. What we have is just “better way”. But we always think we chose the best way in a particular situation. No, there’s absolutely better way than that way and we just don’t realise it. So, the regret is naturally happened because you didn’t choose the best way. Besides, Regretting is not as negative as you think, we need regrets to make next success in a challenge in our life. To conclude, if you were to take something away from my talk, that would be believing yourself and not think about the best way. Whatever you do, you will regret something later. Take any way you like, and reflect over a cup of tea.